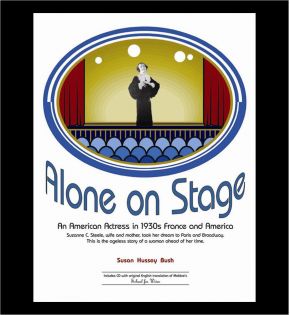 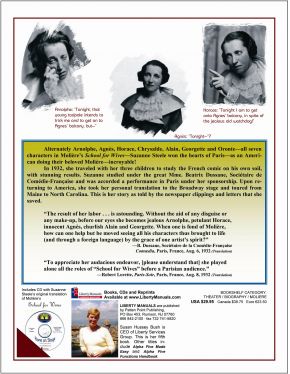 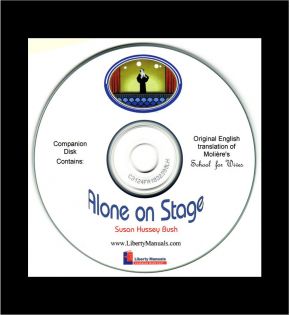 An American Actress in 1930s France and America

Suzanne C. Steele, wife and mother, took her dream to Paris and Broadway.

This is the ageless story of a woman ahead of her time.

In 1932, wife and mother, Suzanne Corbett Steele went to Paris with her three children to study Molière and his play, The School for Wives. She called herself a “monologist” and combined her passion for the arts, especially the theater, with persistence, hard work and an amazing talent.

"When the American actress, Suzanne Steele, a native of Maine, presented before her, all seven roles of “School for Wives,” one of the Moliere’s masterpieces, doing all the parts herself, with true artistry, being at once Arnolphe, the conceited bachelor, Agnes, in turn, Horace, Chrysalde, Alain, Georgette and Oronte, Mme Dussane was amazed, charmed and delighted. In fact she was so much impressed that, in spite of the fact that she was at the height of a busy season, appearing in three or four different plays each week on the stage of the Comédie-Française, she offered to sponsor Miss Steele’s public appearance in Paris.

"If Mme Dussane was astonished to behold such talent from across the water, Miss Steele was more surprised with herself. She had never dreamed when she embarked for Paris last Summer that she would gain audience with the great Dussane. Neither did she dream that her American interpretation of “School for Wives” was to prove such a sensation in sophisticated Paris when she made the public appearance which Mme Dussane sponsored. When she set out for the Continent a year ago it was with the intention of making a study of Moliere on his own French soil. She never guessed that Moliere lovers of Paris would pick her out of the scores of actors and actresses who yearly invade the Old World and extend to her such a generous welcome."

Please tell Susan I LOVE her book. I am so very impressed.
Kathryn Bush 11/06/2008, 11:46
Wow! The book about Zana is fabulous…Your writing is clear and has allowed me to know the woman behind the grandmother. I believe we would have been fast friends, too.
Anne 11/06/2008, 11:42
What an impressive book you wrote! To think I thought I knew Zana. Had no idea about her theatrical career.
Martha Jennings 11/06/2008, 11:40
I have been in a complete state of awe every since your wonderful book arrived yesterday. Yes, I have read the whole thing and I am sure I’ll read it many times. What wonderful memories, even for me. I had a nice chat with Martha (Jennings) about it this morning and we both agreed it is a masterpiece – I don’t see how you did it with all those pictures, clippings, etc…I think it is a beautiful piece of work…
Elaine Rathbun 11/06/2008, 11:38
I am sure impressed with both the publication of “Alone on Stage” as well as with the subject of the book… Quite a story and history.
Jerri Bush 11/06/2008, 11:36
Write a review

Suzanne Steele and "The School for Wives" in Paris . . .

Click here for an excerpt of Chapter 1: A Passion for Drama

Molière, née Jean-Baptiste Poquelin, was born in Paris on January 15, 1622 and discovered early in life that he had a talent as a mimic. He transferred that predilection to paper and stage, becoming a playwright. Still revered in France today, one of his best known plays is “The School for Wives,” a delightful farce about a man’s theory on how to train his wife to serve him. In the end, of course, he finds this is not so easy to do. There are seven characters (five of them men) and Suzanne Steele played them all, using her own translation from the original French.

The Comédie-Française in Paris performs the works of classic and contemporary playwrights. During its three hundred year history, Molière's works have been presented close to 32,000 times. It is widely known that the French are not usually welcoming to outsiders who attempt to move into their literary territory, especially Americans. Suzanne broke this barrier and was given a presentation in Paris under the sponsorship of its premier actress.

“To appreciate her audacious endeavor (please understand that) she played alone all the roles of "The School for Wives" before a Parisian audience.” —Robert Lorette, Paris-Soir, Paris, France, Aug. 8, 1932.

School for Wives (L'École des Femmes) by Molière was written in five acts; Suzanne consolidates the play into three.

Characters in the play
(in order of speaking)

Horace, son of Oronte, in love with Agnès.

Oronte, father of Horace and friend of Arnolphe.

Acts I and II: One Morning
Acts III and IV: Two Hours Later
Act V: Dawn of the Following Morning
The play opens with a conversation between Arnolphe and his friend Chrysalde, as the two men come out of Arnolphe’s house, Chrysalde speaking first: “You tell me you’ve come back home to marry the girl?”

Synopsis of the play. Arnolphe, a conceited, selfish man of middle age, has had his young ward, Agnès, trained in a convent to become a model wife for himself, sim­ple, pliable and unspoiled. He has kept her mind entirely undeveloped, and her imagina­tion free from all knowledge of good and evil.

He has recently taken Agnès from the convent and kept her cloistered in a house near his own, in Paris, awaiting the day of their marriage. Business, meanwhile has taken Arnolphe from town for ten days, and in his absence Agnès has met and fallen in love with Horace, son of Arnolphe’s old friend Oronte.

Arnolphe is attempting to change his own name to the more aristocratic one of ‘de la Souche,’ the only name by which Agnès and the servants know him. Horace, on the other hand, knows him only as ‘Arnolphe,’ his father’s friend.

This masterpiece of Molière is a play of youth and love, written and produced in France nearly three hundred years ago. It pleads the cause of youth and ridicules the pretensions of those who would use their authority to mold the lives of others.

Get social with us